Skip to content
Home » News/Blog » Blog » Where on Earth is Dark Harbour?

I often wonder which seaside town would make the best location if (when?!) a film producer ever decides to turn Dark Harbour into a movie. How about the place that inspired the books, perhaps? Well, the truth is, Dark Harbour is not based on one town, but an amalgamation of seaside towns that I’ve visited throughout my life (plus my hometown which isn’t beside the sea). It’s part Hunstanton, part Skegness, part Folkestone, part Whitby etc.

All of these seaside towns I visited in my childhood on family holidays. Most of them, as you may have noticed, are situated on the east side of England. Living in the east, it was the coastline that we naturally gravitated towards. In my early childhood, however, there were times when we ventured all the way over to the other side of the country. So I’m certain that Dark Harbour also has a little bit of South Wales in it, plus a certain other place on the west coast that we once visited. 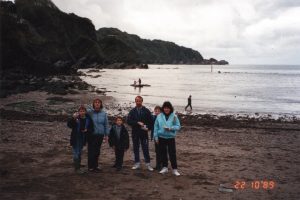 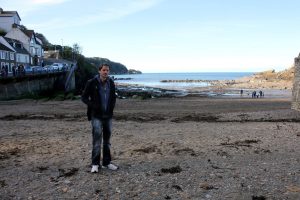 That place was a village called Combe Martin in North Devon. We went on holiday there during the October half term of 1989, back when I was only ten. It was one of my most favourite holidays, and the place left a great impression on me. There was such a different atmosphere to the east coast. The place was so brooding (certainly at that time of year), with such dramatic cliffs and rugged coastlines. 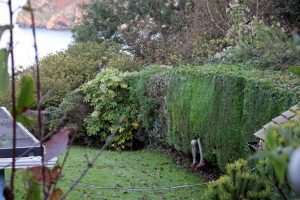 …and dead bodies stuffed in bushes

I don’t actually remember a great deal from that holiday of 30 years ago. Random details still come to mind, like a certain Belinda Carlisle song being on the radio whenever we got in the car. I liked the song so much that I later bought the album (come on, a Beatle played guitar on it so it had class). Listening to Leave a Light On still takes me back to that holiday. We stayed in a chalet, and I remember that when we first got there, the television was in the bathtub. My parents didn’t actually like the chalet as it was so grotty and vowed never to stay in one again; they got a caravan the following year because of this holiday and never looked back. 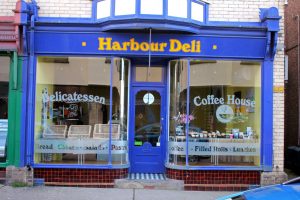 Looks like a great place to grab a bite to eat. Must be a lot of Dark Harbour fans in Combe Martin.

We were also there with our cousins (fellow writer Killian H Gore among them) and together with my brothers, the six of us would go exploring. It was during our explorations that we discovered a secluded beach down a steep cliff face. Down there we found a beautiful cove that we kept running off to throughout the week. Along with numerous caves and tunnels, at low tide there was an outcrop of land that became an island at high tide. Climbing upon it, we named it Hameton Island, an amalgamation of our surnames. In the first edition of Dark Harbour: The Tale of the Soul Searcher, one of the characters refers to an island with this name (although you may not find this anymore). 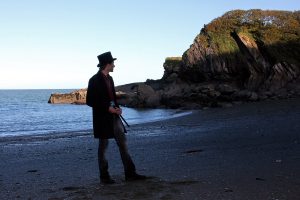 Broadsands Beach, the island in the background

It felt like we were the very first people to discover this cove (even though there were steps in place down the cliff face). There was definitely a bit of magic in the air in that place down in Devon, and recently I felt a compulsion to return there. It was the 30th anniversary of our visit, and weirdly, the only time I was able to get away was again during the October half term.

The Tale of the Broadsands Searcher

Before I went, I did some research and found out this cove we visited is actually called Broadsands Beach, and apparently it was voted Britain’s Happiest View. It was a very strange experience retracing the steps of my childhood, especially after so many years. I did take one wrong turn, leading my wife down to the adjacent cove, ignoring the closed sign in the process. Despite getting stung by a wasp ascending the cliff (yeah, that’s karma for me, sucker), we persevered to Broadsands. 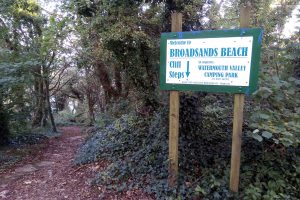 So eager was I to find this place again, my legs were aching terribly for days after with all this cliff climbing. The steps leading down to Broadsands are rather steep and I maybe forgot I wasn’t a 10 year-old as I went up and down them. But I can absolutely confirm that there is definitely a lot of magic still there in that cove. 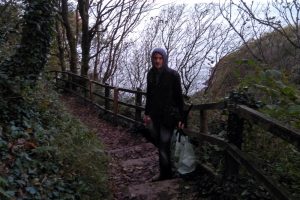 The steps to Broadsands Beach

In fact, as we were still descending the steps, a chap with his family asked me if I knew anything about seals… Just over from us, taking shelter after the recent horrible weather, was a seal pup. We went and investigated but it didn’t seem injured (I ended up taking some more video of it the next day – see below). We decided to let it be and continue exploring, taking in the sight of Hameton Island.

In Dark Harbour, one of the most significant locations is a place called Moonlight Cove. Like everything, I never directly base anything on specific people or places, and whilst there are lots of differences between Broadsands and Moonlight Cove, I think Broadsands must have been the biggest inspiration, the story of young Jeremy climbing down the cliff face as we did as young boys. Down on Broadsands you feel like you are in your own world, as though this is the place mermaids come to comb their hair when no one is around. 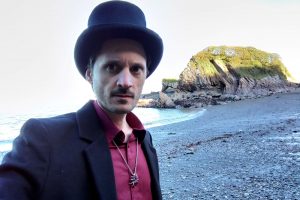 We visited the cove three times during our recent visit. Partly that was because I kept feeling the draw, but partly also because I had plans to involve the place in Dark Harbour… As it’s such a cool location I got my wife to take some Joseph Kiel profile photos, and I also took some footage to create a trailer for my books… keep your eyes open for that. 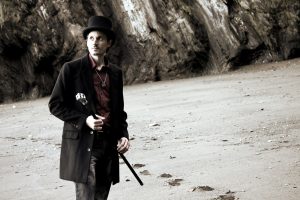 I never did get to climb up on Hameton Island while we were down there. I was so tempted to run up there, but, alas, I had stuff to do. Hopefully much sooner than 2049 I will make the seven hour trip to Devon and explore it again. 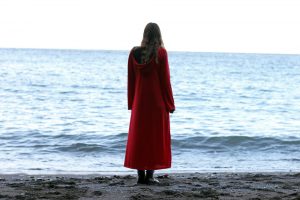