Yes, I realise that that’s what the world needs right now, another book about vampires. But listen, this Broken Melody one is different. Trust me…

Okay, so you know what? Maybe it isn’t that different. But people will still read it, because you know why? 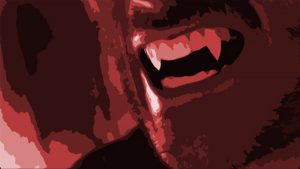 Because blood! And big teeth! And stakes through the heart! This book has all of that!

So this is it, my third novel, called Broken Melody, about a girl called… you guessed it… Melody, and one morning she wakes up with a ‘fangover’, and worries that she may have run into some vampires the night before. I know I’m yet to complete the Dark Harbour trilogy but I’ve been taking a break from that (and I still have no idea when the concluding episode will come along so you’ll just have to remain hanging there). 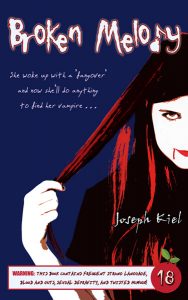 I wanted to try something fresh. Having learnt a few things from my first two books, I thought I would try a different approach, and there’s certainly a lot about this book that’s different. It’s the first novel I’ve written in the first person for one thing, but, most importantly, it is pretty clear on its own genre. Audiences are hopefully going to understand off the bat what it’s about and what to expect.

So what can you expect? Well, there’s a lot of twistedness in this book. I suppose I didn’t quite appreciate how twisted and horrific the Dark Harbour tales got at points, so I thought I would make that clear from the start. Broken Melody is definitely for mature audiences, for people with a strong stomach who aren’t easily offended. It is balls out grade-A NSFW material! Plenty of sex, drugs and rock ‘n’ roll, various OMG and WTF moments. I also think it has an interesting story to tell and hopefully it’s a pretty pulsating page-turner that gets going from the first chapter.

I’ve described it as a cross between The Hangover and The Lost Boys, and it also has a twist of Trainspotting and The Goonies in it, and yes, I realise all of those are films… but in the case of Trainspotting I’m also including the book version of that, something I read last year as I was writing Broken Melody. 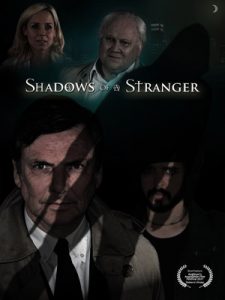 So Broken Melody is set in Edinburgh? Actually no, it’s set in a fictional English city called Meridian. And where haven’t you heard of that place before? It’s actually the setting for the feature film I made, Shadows of a Stranger. Yeah, that may explain all the movie references – there’s a distinct filmic quality to this book. In fact, some of the characters from my film make cameos in this book in some weird, cross-medium mashup. Because why not? It expands the universe of the film while creating completely new characters, a bit like Rogue One I guess. Ah there we go, I’m back on the films again!

To keep with the visual theme, I’ve decorated this book with a series of images, taking some new snapshots from the original world of Meridian that we’d created for the film, and making plenty of original ones too. So it’s somewhat graphic novel-esque. I’m a filmmaker who also happens to be a writer (or maybe that’s the other way round… I still haven’t worked it out yet) so that’s my excuse for doing that. I think visually. But I hope it’ll show readers that it’s more than just another standard vampire book. 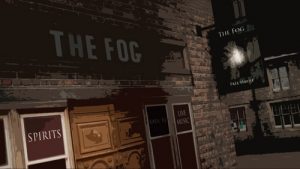 So please go and read it! The release date is 2nd February 2018. The reason for me choosing that particular date is that that is the day that the novel actually starts. You’ll maybe work out the reasoning for that when you read the book.

And if you’re wondering what this whole Shadows of a Stranger business is all about, then you can catch that on Amazon Video right now. And when you read the book you’ll be like ‘I know this guy!… And hey, I know this place!’

Broken Melody is available to download at Amazon, with the print version in the works too. Please let me know what you think to this strange and shadowy vampire novel!