On the 17th of July last year I started writing the first words of the final book of the Dark Harbour trilogy. I am delighted to announce that today, exactly nine months on, I have now completed the first draft. 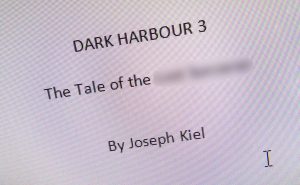 Dark Harbour Part 3: The Tale of the Something Something

I always knew that this book was going to be a big challenge. Not only were there various loose ends and messy situations left at the end of book 2, the truth is that I needed a bit of time to step back from Dark Harbour to work out where I went next with it. Soul Searcher and Night Shiner were both stories that have been with me for a very long time. In fact, both stories started life as film scripts. I’d never written a script for part 3 though. I didn’t even have an outline. Not a thing. So I needed a bit of time to immerse myself in the world again and get back in touch with my initial inspirations. 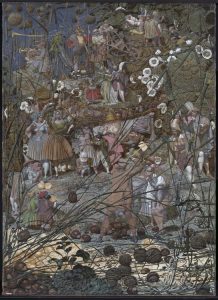 Inspirations… The Fairy Feller’s Master-Stroke painting by Richard Dadd, something that had also inspired Freddie Mercury in an early Queen song

I still didn’t have a pristine vision of where I was going when I started out on July 17th, but I went with a few ideas that took a life of their own and have turned into something that I am very pleased with indeed. There’s a little more fantasy in this one, a lot more magic, and a fair amount of eccentricity thrown in too. Each book has had its own flavour within this urban fantasy world: the first one had romance, the second one horror. As tempted as I was to stick with the formula of book 2, I changed the flavour again, going for something that has a strong hit of English folklore of fairies and sorcery. I’ve had a working title that has stuck with me during the writing process, something I will perhaps be revealing soon.

I hope that it will be a satisfactory conclusion to the trilogy, and although things have come to an end in part 3, this book may well leave the door open for more…