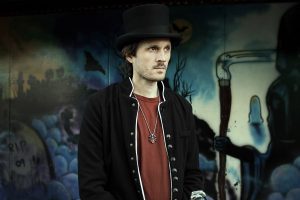 Little is known about the writer Joseph Kiel, but the photograph here is evidently of him. Whether he is a resident of this place called Dark Harbour, or whether he is just an observer of it, nobody knows.

We do know that The Tale of the Soul Searcher was Joseph Kiel’s first novel and that his counterpart in our dimension, Richard Dutton, has written a number of film scripts that have involved: aliens visiting Earth, mad professors building contraptions capable of temporal shifts, and young strangers dropping banana milkshakes. Curiously, one of these films happens to star a former timelord!:
Shadows of a Stranger

In his parallel dimension, Joseph Kiel may live in a house just down the road from you. If you can slip through the strands of the time-space continuum, maybe you might bump into him one day. Or maybe he is already secretly among us… somewhere…