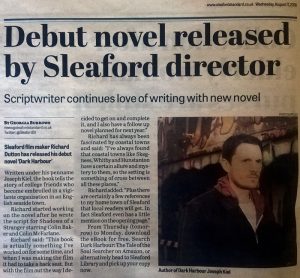 Joseph Kiel in the Sleaford Standard

March 2016 marked the release of the first of the Dark Harbour books as it was made available on Kindle, the paperback version following a few months later. During its promotional run, Joseph Kiel featured in his first newspaper articles in the Sleaford press, including the Sleaford Standard.

Dark Harbour: The Tale of the Soul Searcher has soared the Amazon charts during 2016 and has been downloaded thousands of times as it now starts to receive reviews which, so far, have all been 5*. It is still early days, but so far the book has readers hooked and has been described as “awesome” and “perfection”.

Stay tuned for more news on Dark Harbour: The Tale of the Soul Searcher as it continues to find its place in our dimension!